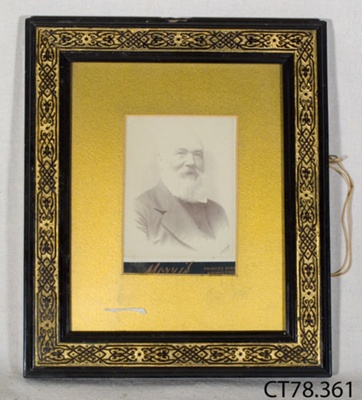 Photograph; a faded, black and white image of the Reverend William Bannerman. He is pictured from the chest up, wearing a dark suit and short beard.
The Reverend William Bannerman, of Kirkcaldy in Fife, arrived in New Zealand in 1854 and was given charge of the southern district, a parish that extended from south of Waihola to Bluff and Riverton and around which he tramped. In 1856 he married Jane Burns. The two were involved in raising money for overseas missionary work, William was involved in building up the administrative framework for the Presbyterian Church and in a campaign against the union of New Zealand's Presbyterian churches. Jane was involved in the YWCA and Dunedin Sailor's Society and served as first president of the Presbyterian Women's Missionary Union.