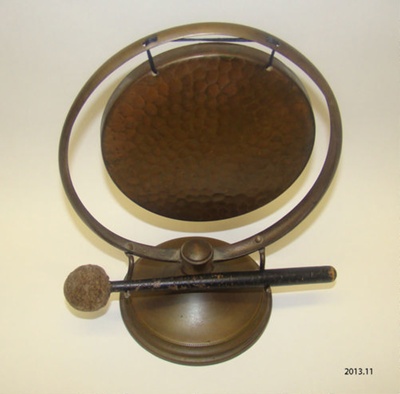 Gong and striker; small metal gong suspended from circular frame with base. Wooden-handled striker has round ball-shaped striker to make contact with the gong. From the wreck of the S.S. Manuka. This was the dining room dinner gong which was recovered from the shore some time after the wreck.

text printed onto computer generated paper label glued to the base of the gong surround:
This was the dining room dinner gong from the wreck of the 'Manuka'. It was recovered from the shore some considerable time after the wreck. J.H.Wilson, Papatowai. Donated by: John Wilson, 214 Peninsula Road, Kelvin Heights, Queenstown.