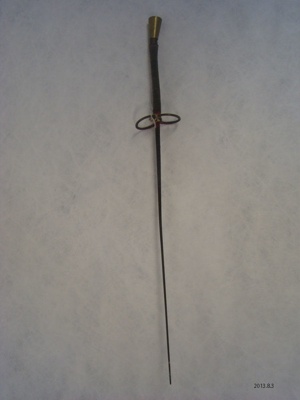 Metal bayonet-style tool used by archaeologist, Les Lockerbie. The tool is similar to a walking stick crossed with a bayonet. The metal body is four-sided tapering to a rounded point. The hilt comprises a metal knob above an area bound tightly with a thread. The guard is metal in a figure of eight shape.

This was used by Les Lockerbie. Les Lockerbie lived his entire life in Otago. He was born in Winton in 1911 and died in Dunedin in 1996. Les’s interest in archaeology began when the family moved to Maclennan in the Catlins to run the local store. At high school age Les began exploring the early Maori sites in the vicinity, especially those at Papatowai and King’s Rock. This was the beginning of a life long interest and study in the early Polynesian inhabitants of the South Otago coast.

Les was a recognised pioneer in excavation methods and carbon 14 dating. He was meticulous in recording and mapping sites and as a result published results of his work in numerous scientific journals. He was a primary school teacher and later became Education Officer at the Otago Museum (1947-1976). This position made him a staff member of the Dunedin Teachers College and for many years he involved College students in archaeological excavations on the Manuka Point island site of Pounawea.