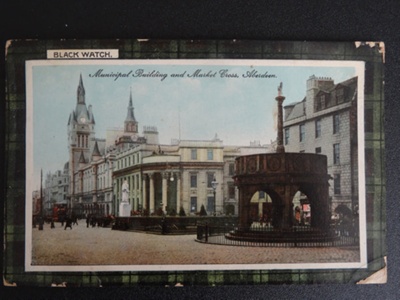 Coloured postcard of Aberdeen street scene (Municipal Building and Market Cross), with Black Watch tartan border. Message on reverse is to Kate Weir, sister of Cowan Weir of Owaka Valley, who was serving in the NZEF. Cowan was from evacuated from France, sick, in early 1918 and spent months in hospital and convalescing in England. His visit to Aberdeen may date from that period. Hand written number 8, indicates it was one of a series Cowan sent to Kate.

presumably printed prior to the outbreak of war in 1914