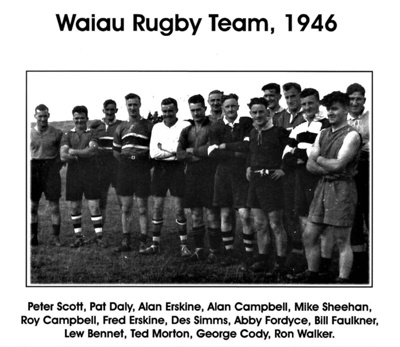 The club’s facebook page today, proudly tells us: “The Waiau Star Rugby club hails from the mighty sausage capital of NZ. Waiau has a staunch swarm of supporters that fuel the spirit of the team.”

Brief history of the club (I hope locals can help us add to the story):
I have heavily relied on Des William’s “Hole in the Bush” book on Tūātapere for the information used here. This account tells how in 1912 a new club formed at Tūātapere called the ‘Waiau Rovers’ were seeking affiliation with the Western District Rugby Union. The team’s home ground was Te Waewae.

Further on in Des’ account of Tūātapere history, the story of Pat Daly illustrates the locals love of the game leading them to do such things as bike to weekly rugby practice over seven miles of pot-holed and gravelled road, as Pat himself recounts doing, on top of the constant “hard yakka” of farming the land during the day. Then of course there was also the games themselves on Saturdays. He had joined the rugby club in 1934, and it was then known as the ‘Waiau Rugby Club’ as this old photo illustrates. This name apparently stuck until the Ōrawia Star combined with Waiau after WW2, due to lack of numbers. The two names were also combined, resulting in the name ‘Waiau Star’, which I believe remains to this day.

Pat further recounts in Des’ story of the township, how a teacher called Gil Porter, was his first rugby coach, whom he states was a “Southland rugby legend in his own right after kicking 13 points for his province in the historic 19-16 win over Wairarapa at Carterton in the 1929 Ranfurly Shield challenge.” Once his time playing the game was finished, Pat went on to give the club many more years of service, as their secretary for 23 years, also holding the position of President, Western Administrator, before in 1973, becoming elected president of the Southland Rugby Football Union and also being given a life membership of both the Waiau Star and Western sub-union clubs. What a star that man was himself!

In Gordon McLeod’s book, “Up the Waiau”, we find further information about Gil Porter. In the 1930’s in what he terms the ‘sport boom years’, Gil Porter arriving in the district paved the way for the formation of the Waiau Rugby Club in 1933. To quote exactly, “before the decade was out, the senior B banner had been won thrice in succession by players with names such as…”:
(listed below so the names can be found in online searches)
Charlton
Glendinning
Jenkins
Knowler
McIntyre
Mouat
Ogilvie
Stuck
Young

In another Waiau Star Rugby Club memory from Des’ “Hole in the Bush”, is that of Frank Tillard, who during the 1950s-60s, contributed many, many hours and years of community service on the sidelines as “Zambuck”, delivering ‘magic healing water’ and first aid to the team at the Domain. There’s also a lovely photo of him in the book, if you want to look it up. One of the Waiau Star players from the 1960’s was Robert Brookes and there is a photo of him in the Tūātapere book, along with one of John Harvey.

The final entry by Des for the Waiau Star, was for 2009, headed “Fifty years of Waiau Stars”:
In this, he recounts Pat Daly’s (previously mentioned dedication to the club), but also recalls the years he took teams of high school boys to the Balfour ‘Sevens’ and how one year, they won the tournament, even though up against stronger teams from Southland Boy’s High and others across Otago and Southland. After their win, one of the lads said to Pat, “A beer wouldn’t go astray”. There were apparently 10 odd lads in the car and he told them they had better just head for home, but then he took a detour to the Balfour Pub, where he bought them a beer, but just one! As the story goes. Account, narrated by John Harvey, who tells how Pat was so proud of those boys.

If you or anyone you know has any more photos, information or accounts of the early or later Waiau Star or Western Rugby teams during the years, please do share these in the comments section. You can do this by making a comment in the space provided under the image page. Please let us know if you have more records to add, they will add the historic records of this important part of the town.

Digital image of copy only