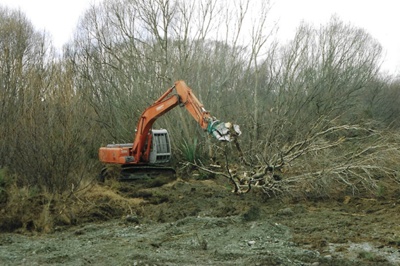 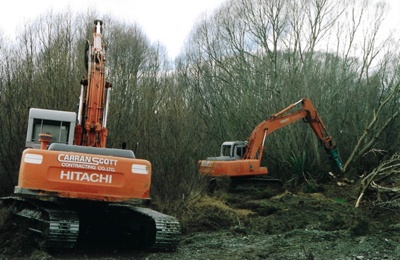 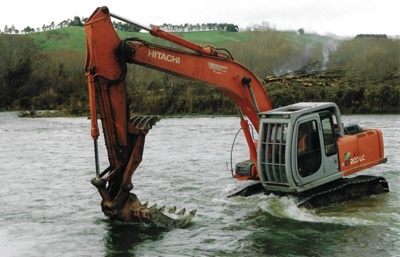 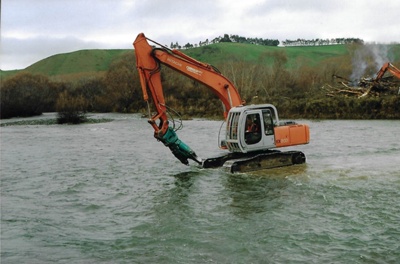 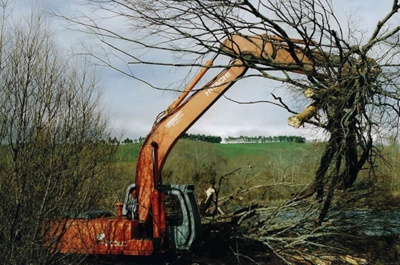 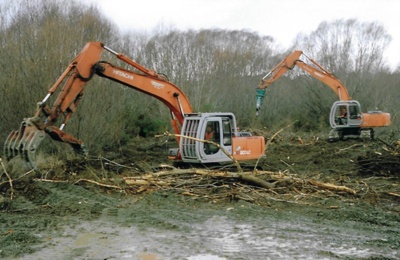 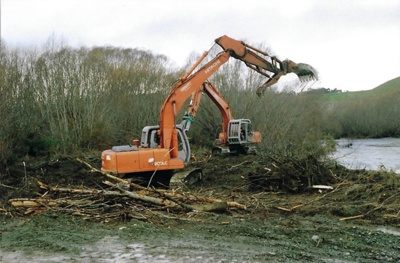 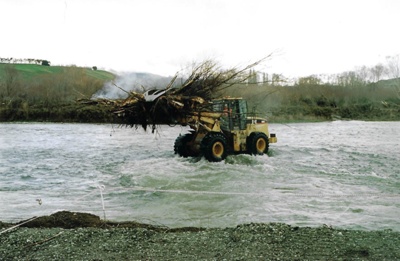 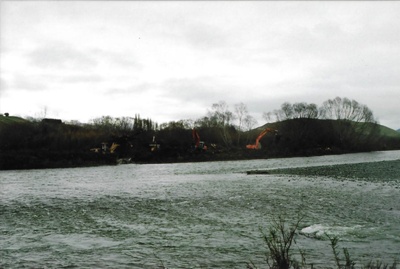 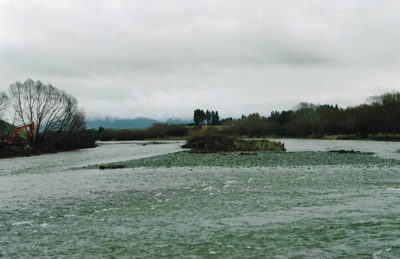 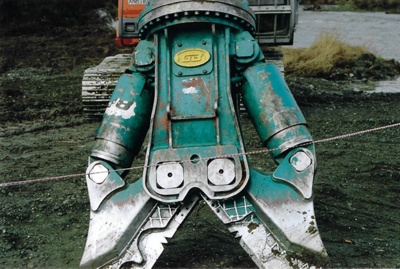 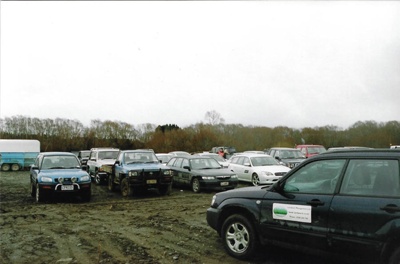 This collection of photos is labelled "Mararoa River Willow Clearance" but no exact date was given. The donors believed it could have been from the early 2000's, but were unsure. However, I noted the name 'Carran Scott Contracting' on the diggers, and they say they started business in 1998, so I have contacted them for more information on this job, and I also saw there was a ute in the forefront of one of the photos with the company logo of Landward Management and their website claims, "Ray Macleod, the Manager of Landward founded the company fourteen years ago," so this would mean that this river clearance was completed sometime after 2008. On further discussions with Ray Macleod of Landward, who has been extremely helpful and interested in this historical archive project, he informs us that, “Graeme Franklyn was working on that project and that was his car at the time. He thinks it was around 2007 and that was an open day, part of a wider inspection/familiarisation tour organised by Southland Regional Council. We were representing Land Information New Zealand, which also had staff present.” He goes on to say, “In 1975 I was a young engineer working for New Zealand Electricity and I was allocated the project clear the river of willows. To do with the Manapouri scheme and river flow being impacted by willows and riverbed gradient changes. Anyway, I left that year and didn't do the work.” But thanks to Ray for updating us with more information on the story.

And on even further looking into river willow clearances in Murihiku Southland, an Environment Southland report from 2 August 2013, tells us that these river willow clearances had been completed by 2011, with the following information:
"The Mararoa River is a medium-sized river with a confined single braid and open semi-braided channel form that flows into the Waiau River immediately upstream of the Manapouri Lake control structure. The section river below Weir Road has been highly modified as part of control of Lake Manapouri for hydroelectric generation. Above Weir Road the river has been the subject of a major willow clearance project that extends to the SH 94 Key Bridge. Since completion of the clearance project in 2011, dynamic river processes are occurring as the river re-establishes a natural intactness.”
Title of report quoted is: Managing Unwanted Vegetation in Southland Rivers - https://www.es.govt.nz › about-us › documents

On another note, it was claimed in 2017 in a Stuff article, by the NZ Federation of Freshwater Anglers, that the willow clearances have led to a decline in trout numbers, as this removed the shading of the trees for the fish. They said: "Agriculture was not only culprit identified by the federation. Removal of willow trees shading was blamed for decline in fisheries values in the Upukerora and Whitestone rivers near Te Anau." So it seems the willow clearances have had both a positive effect on the one hand, with a more detrimental effect for some on the other hand.


If you or anyone you know has any more photos, information or accounts of the Mararoa Willow Clearances during the years, please do share these in the comments section. You can do this by making a comment in the space provided under the image page. And please let us know if you have more records to add, they will add the history. Similarly if you were there when these photos were taken and can add more to the story contained above, please let us know, thank you!

See more about the Willow Clearances on the Mararoa River here:
https://www.sern.org.nz/news/improved-habitat-on-mararoa-river/

Digital image of original only